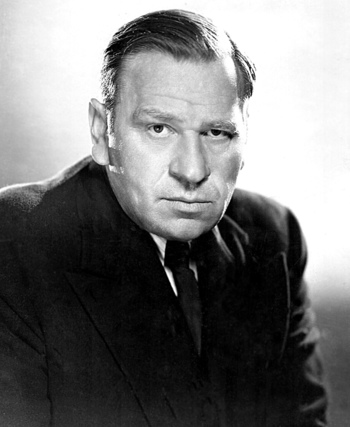 Wallace Fitzgerald Beery (April 1, 1885 – April 15, 1949) was an American film actor, best known for his portrayal of Long John Silver in the 1934 screen adaptation of Treasure Island.

Born and raised in Missouri, Beery began his career on stage and in silent movies before transitioning to sound films. In 1930 he had been cut loose by Paramount and was looking for work when he landed a role in The Big House that had originally been intended for Lon Chaney before Chaney's sudden death from throat cancer. The movie was a huge hit and Beery became a star. In 1931 he starred in The Champ, which won him the first and only tied Academy Award for Best Actor to date (Fredric March was the other winner that year, for Dr. Jekyll and Mr. Hyde). He had the occasional leading role but most of his best-remembered films had him in supporting parts.

Beery's brother Noah was also an actor and the two of them had already been performing together long before becoming movie actors, singing comic opera. (His nephew, Noah Jr., would follow their footsteps in the acting profession, most notably playing Jim Rockford's father Rocky in The Rockford Files.) Although Beery's career slowly dimmed, none of his films were box office bombs and he was always top-billed with the rest of the main stars. His last few roles were primarily in Westerns.

He died of a heart attack at 64 years of age. Notably, Mickey Rooney's father died a month later and was buried next to Beery's grave.

Fun fact: Beery's name is also Cockney Rhyming Slang for "query", and his appearance and mannerisms inspired those of the animated character Barney Bear as well as the dragon Elliot in Pete's Dragon (1977).