Film / Way for a Sailor 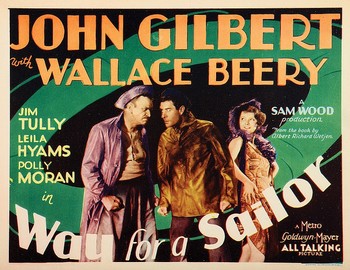 It is a tale of the hell-raising, hard drinking sailors of the Merchant Marine. Jack (John Gilbert) and "Tripod" (Wallace Beery) are your standard-issue sailors, who spend months at sea, then eventually make port somewhere and chase after booze and women. All sailors agree, of course, that serious attachments to women are to be avoided, as women pull sailors away from the sea.

However, Jack is forming a serious attachment to a woman. Every time he gets back to home base in London he brings a present for lovely Joan (Leila Hyams), a clerk at a shipping company by the docks. Joan resists the attentions of love-'em-and-leave-'em Jack, for a while anyway, but eventually starts giving in. Does Jack really care about Joan, or is he just chasing a particularly difficult conquest?

Pay attention near the end and you will see Joan speaking briefly with a mustachioed officer on a ship. That bit part was played by a young Ray Milland, who was still several years away from hitting the big time.