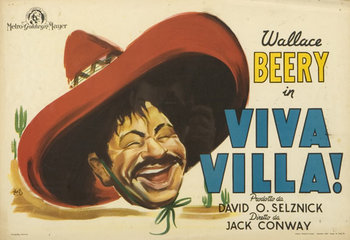 Viva Villa is a 1934 American pre-Code Western film directed by Jack Conway, starring Wallace Beery. It is a heavily fictionalized account of the life of Mexican bandit and revolutionary Pancho Villa.

The film starts with Villa as a teenaged boy in Mexico. When the local lords confiscate the lands of the peasants, Pancho's father protests, and is whipped to death outside the walls of the town as punishment. Adolescent Pancho then stabs the man who whipped his father In the Back and heads off to the mountains. The film cuts to a good 30 years later or so to find Pancho a flamboyant bandit, who leads raids against the corrupt Mexican aristocracy and dispenses rough frontier justice to particularly abusive lords.

Pancho is introduced to Francisco Madero, an idealist who seeks to reform Mexico and overthrow corrupt president Porfirio Diaz. At Madero's urging, Villa leaves banditry behind and fights in an army like a proper soldier. Despite being an illiterate peasant he turns out to be a brilliant tactician and wins several battles in The Mexican Revolution, eventually being key to the installation of Madero as president.

He's still an illiterate bandit, though, so Madero dismisses him, due to Pancho not being cut out for civilian government. However, when Madero is overthrown and murdered in a coup by counter-revolutionaries, Villa saddles up and rises again.

Viva Villa! became famous as a Troubled Production. Lee Tracy, originally cast as Sykes the reporter, was fired from the production after either making an obscene gesture towards a military parade or drunkenly urinating on a military parade. The film was shot on location in Mexico at great expense, and Howard Hawks, the original director, quit the production over the disorganized and unsafe conditions. The film is also famous for using the "inverted W" rig that deliberately tripped galloping horses in order for greater drama, often killing the horses—the tripwires can be clearly seen during Pancho's dramatic horseback assault on a town. Filming went on for three years and the movie wound up costing over a million dollars—but it became a huge box office hit and earned all of its bloated budget back.

Fay Wray stars as Teresa, Don Felipe's beautiful sister. Compare Viva Zapata!, a film made 20 years later telling the same events, but from the perspective of the other peasant rebel during the Mexican Revolution, Emiliano Zapata.