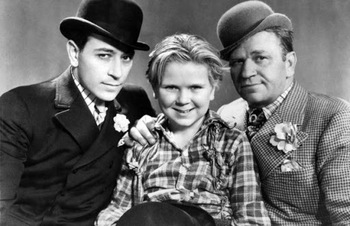 Set in The Gay '90s, saloon owners Chuck Conners and Steve Brodie are in a constant rivalry. Chuck lives with a homeless child named Swipes, who adores Chuck and hates women. So when one day, Chuck brings home a recently homeless school teacher named Lucy, Swipes is furious. He locks her in a closet while Chuck is out, which Chuck spanks him for. Hurt by this, Swipes decides to leave.

He is found sleeping in a doorway by Steve, who takes him in. Steve's notoriety is on the rise, so he plans to jump off the Brooklyn Bridge to bring more attention to his saloon. In reality, he only plans to throw a dummy off the bridge. When the dummy goes missing though, Brodie is forced to make the jump for real, despite Swipes' pleas.

As Steve is haled a hero, Chuck convinces temperance activists to tear down Brodie's saloon, which they do. When war is declared against Spain, Connors enlists to get away from the Bowery, as Steve has become a big shot and married Lucy. He regrets this decision however when he comes home to find Swipes had returned.

Professional rivals of Brodie's then find Connors and deceitfully tell him that Brodie did not actually jump from the bridge, showing him the dummy. Connors demands Brodie give his saloon back. Brodie denies using the dummy, and the two have a long fight on a barge in the East River to settle their differences. After Connors returns victorious, he is arrested for assault and battery with intent to kill. Brodie, however, refuses to implicate him. As Brodie recovers, Connors visits his hospital only to begin another fight, but Swipes stops them and urges them to become friends.

Connors and Brodie then go off to war, with Swipes smuggled along in an artillery box.