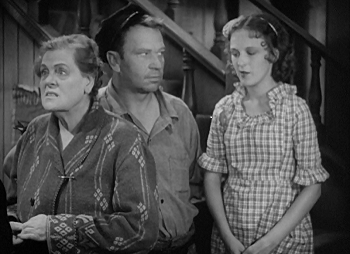 Min is a tough old lady who keeps an inn by the docks. Her friend Bill is a commercial fisherman who often stays at Min's boarding house when he's in port. Min is guardian to a teenaged girl, Nancy, who was left at the boarding house by her horrible alcoholic mother Bella when Nancy was only six months old. Now Nancy is growing up, and Min must make some hard choices about whether or not to keep her living in a boarding house by the docks, surrounded by drunken sailors and other disreputable characters. The situation is further complicated by the return of Bella after an absence of many years.

Min and Bill was a massive success for MGM. Dressler, who was sixty years old and had made her film debut back in 1914 but had mostly performed on the stage, won the Academy Award for Best Actress and enjoyed an unlikely stardom in a series of hits before cancer killed her in 1934. Beery became the highest-paid actor at MGM after the success of Min and Bill and was an A-lister for the rest of The '30s.