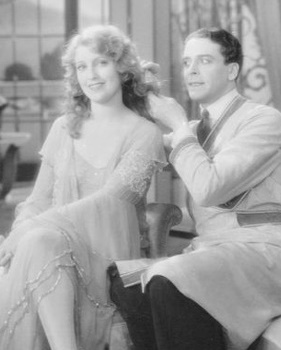 Monte Carlo is a 1930 musical Romantic Comedy film directed by Ernst Lubitsch, starring Jeanette MacDonald and Jack Buchanan. Loosely based on the novel Monsieur Beaucaire by Booth Tarkington, with additional elements drawn from a German play called The Blue Coast, it is best remembered today for the classic song "Beyond the Blue Horizon."

Penniless countess Helene Mara (MacDonald) has run out, for the third time, on her wedding to the wealthy Duke Otto von Liebenheim. The duke vows to the disappointed wedding guests that he'll bring her back. Meanwhile, Helene, dressed only in a fur coat over her underwear, hops aboard a train bound for Monte Carlo, planning to gamble her way into a fortune. On her way to The Casino, she catches the eye of Count Rudolph Farriere (Buchanan). To get close to her, he poses as her new hairdresser.

Rudolph quickly learns that Helene is losing at the gambling tables, and that her bills are mounting. When the duke arrives to take her back home, she is tempted to finally marry him as a way of solving her financial difficulties. Rudolph asks her to let him take her last thousand francs and gamble with it, saying he has a foolproof system. They spend a delightful evening out on the town, and then he leaves for the casino. A few hours later, he returns with a large amount of money (which he has actually brought from his room). Helene kisses him passionately, and they agree to talk more the next day.

However, in the morning, the countess is embarrassed at having been so familiar with a mere servant. They quarrel, and he walks out. That evening, she goes to the opera with the duke and sees a performance of Monsieur Beaucaire, about a noblewoman who falls in love with a prince posing as a hairdresser. She also notices Count Rudolph sitting in one of the expensive boxes reserved for nobility. When the duke falls asleep, Helene goes to Rudolph's box, and he reveals his true identity. As she starts to ask if he can forgive her, the main character of the play onstage says the same thing to the prince. In the play, the prince leaves the woman because she rejected him when she thought he was a commoner; but Rudolph tells Helene, "I don't like that ending. I like Happy Endings." The movie ends with the two of them departing from Monte Carlo on a train, singing a Triumphant Reprise of "Beyond the Blue Horizon."