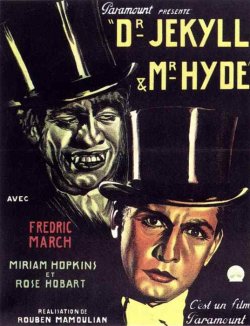 Dr. Jekyll and Mr. Hyde is a 1931 movie based on the novel The Strange Case of Dr. Jekyll and Mr. Hyde by Robert Louis Stevenson. Directed by Rouben Mamoulian, it stars Fredric March in the dual title role, for which he won the only tied Academy Award for Best Actor to date (Wallace Beery also won that year, for The Champ). This is notably one of the few screen adaptations to use the correct pronunciation of "Jekyll" (Jee-kyll). The film was remade in 1941 starring Spencer Tracy in the title role.

Henry Jekyll is a well-meaning doctor who believes that man is not one, but two, with good and evil fighting for supremacy. Frustrated emotionally and sexually by a postponement of his marriage to Muriel Carew (Rose Hobart), his colleague Dr. John Lanyon's (Holmes Herbert) skepticism of his theories, and barmaid Ivy Pierson's (Miriam Hopkins) temptations, he ingests a formula that transforms him into the devious Mr. Hyde. Now without any sense of moral restraint, Hyde meets and terrorizes Ivy as he awaits Muriel's return, threatening to kill her if she doesn't do as he commands.

Jekyll attempts to make amends by giving Ivy money to escape, but on the night of Muriel's return party, he finds he's turned into Hyde without the potion. Hyde attacks and kills Ivy, evading the police by ordering Lanyon to get the chemicals necessary to turn back into Jekyll. A distraught Jekyll breaks off his engagement to Muriel for her own safety and out of remorse. Hyde emerges once more and attacks Muriel, kills her father, and escapes to the lab to transform back. Jekyll lies to the police that Hyde has escaped—but Lanyon betrays him, and when Hyde attacks him he's shot dead, turning into Jekyll as he passes on.