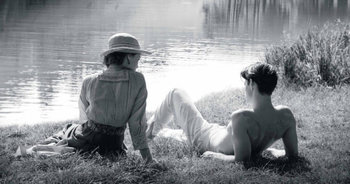 1919, a small German town. Anna (Paula Beer) mourns the death of her fiancé, Frantz Hoffmeister who was killed during World War I. One day while leaving flowers on his grave, she sees a Frenchman, Adrien Rivoire, (Pierre Niney) do the same. He tells her that he is a friend from Frantz who studied in Paris before the war.Soon, and despite the animosity of the town towards this Frenchman, Adrien is invited at the Hoffmeister's table and his stories about Frantz help the Hoffmeisters and Anna to get over their grief. But Adrien may not have told everything...

The film is a remake of the American movie Broken Lullaby. It was noted for its delicate and stylish execution as well as its pro-peace, anti-nationalism and feminist message.