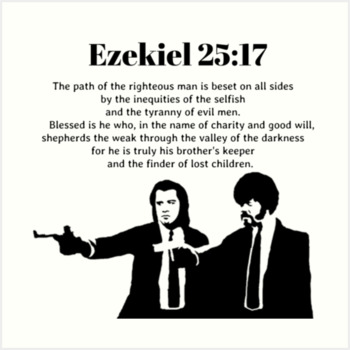 "And I will strike down upon thee with great vengeance and furious anger those who would attempt to poison and destroy my brothers. And you will know my name is the LORD, when I lay my vengeance upon thee."
— Jules Winnfield (mis)quoting The Bible, Pulp Fiction
Advertisement:

A hitman or bodyguard frequently quotes Biblical verses while killing people. He may actually also be a priest, but may also just be using them to be ironic. Or doesn't know what the verses in question are actually referring to.

Although The Bible is a frequent source for the quotes (there is a lot of vengeance being laid down in it) any religious text qualifies, as well as things that sound biblical or religious.

The verses quoted may change depending on who the hitman is talking to, or he may just have one "favorite" that he always uses.

Related to Sinister Minister, Bad Habits, Warrior Monk and As the Good Book Says.... A subtrope of In the Name of the Moon, Religious Bruiser, Real Men Love Jesus, and Churchgoing Villain. See also Badass Israeli and All Monks Know Kung-Fu.