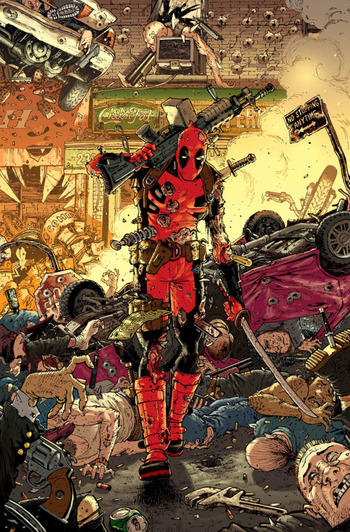 Someone's put the hit out on you. But no matter, you're armed and dangerous yourself, and when the hitman catches up with you, you get the drop on him, and simply put two in his chest. Problem solved, crisis averted.

And then he gets up, dusts himself off, mutters some kind of pithy one-liner, and comes after you again.

This character shows up frequently in works of fantasy and science fiction. The professional killer who themselves cannot be killed. Either they are straight-out indestructible, or they possess a Healing Factor that lets them recover from any injury. Why they hire themselves out as hitmen can vary from character to character.

Depending on the universe, the Immortal Assassin may have been given their immortality through supernatural or technological means. Often, Immortal Assassins are much older than they appear, not able to die of natural causes, and as such can have a bad case of "immortal angst" or "immortal smugness". If they hail from a time and place before gunpowder was invented, they may prefer bladed weapons or hand-to-hand combat, eschewing guns as "uncivilized" or "clumsy." As a consequence, they will possess phenomenal martial arts skills, honed from hundreds of years of practice.

Many Immortal Assassins consider themselves absolute professionals, devoted to the job at hand. They see killing as an art form, and make a serious effort to be as close to perfect as they can get. They may adhere to their own version of a "warrior's code," with a strong sense of personal honor. Often, this is because they come from ancient cultures that put a great emphasis on honor and martial prowess, and they see their careers as an extension of that.

Of course, there are exceptions. Some Immortal Assassins are sadists who kill out of pleasure or out of boredom. Being unable to die has left them so emotionally detached from the human race that killing mortals is little more than a game to them, a way to pass the time. Others are simply in it for the money. Some are just Ax-Crazy...

Most of the time, the Immortal Assassin is the villain of the story. They can be a Knight of Cerebus, brought in by the Big Bad when all other plans have failed, a genuine unstoppable badass more dangerous than any our heroes have yet faced. Maybe they're a Diabolus ex Nihilo. Alternatively, they may be a sympathetic character, particularly if whatever circumstances led to their becoming immortal or an assassin (or both) are tragic enough. On occasion, they will even do a Heel–Face Turn, join the heroes, and become The Atoner. If part of an ensemble, they may even be used for comic relief; since Immortal Life Is Cheap, the Immortal Assassin can suffer truly horrific injuries and shrug them off.

There may be ways in-universe to defeat the Immortal Assassin. The Assassin may have a carefully-guarded weak spot, or they may be injured so greviously that their healing factor simply may not be able to compensate. Another option is total physical destruction of the Assassin's body, so that there is nothing left for the healing factor to regenerate. Use of Applied Phlebotinum may kill them, or deprive them of their immortality. Alternatively, the Assassin may be neutralized without being killed, imprisoned somehow, or even become Sealed Evil in a Can. Or in some cases, if the Assassin is just in it for the money and has no personal stake in the proceedings, simply calling off the hit will be enough.

There may be overlap with the Implacable Man, particularly if the Immortal Assassin isn't entirely human. Compare and contrast Undying Warrior.