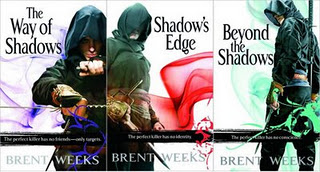 Pretty cover art to the original trilogy. No relation to that one video game. These guys don't have beards.
"Assassins have targets. Wetboys have deaders. [...] Once you've accepted the contract, whatever's left of the deader's life is just a formality."
— Durzo Blint
Advertisement:

The Night Angel Trilogy is a fantasy novel series by Brent Weeks, the author of The Lightbringer Series. It's about a boy from the slums who becomes an apprentice to a famed wetboy, assassins with magical talents, and who inherits a magical artifact which gives him a manner of supernatural powers. Lots of politics, war, and evil megalomaniacs. Major subjects include Kylar's feelings about his job, his love triangle, and the fact that bad things happen to good people.

In some ways the story reads like a strange adult-themed hybrid of Mistborn: The Original Trilogynote  To the point that Brandon Sanderson once commented that Brent Weeks writing was similar enough to his that, in the event that he Died During Production, Brent is one of the writers he might recommend for finishing The Stormlight Archive, as Sanderson finished Robert Jordan's The Wheel of Time and The First Law, with a bit of The Farseer Trilogy thrown in for good measure. From there things build to a study of faith, love, the cost of doing the right (and wrong) thing, what to do in an unfair universe, and a look at what immortality can do to a person. Add in a high amount of action, politics, and a multitude of plans conducted by multitudes of people of increasingly complexity and you have an idea of what the series is like.

The first book in the series is The Way of Shadows, second Shadow's Edge, third Beyond the Shadows. A novella was released in 2011 in audio or e-book format only called Perfect Shadow.

No relation to the movie Night Angel.

These books provides examples of the following: