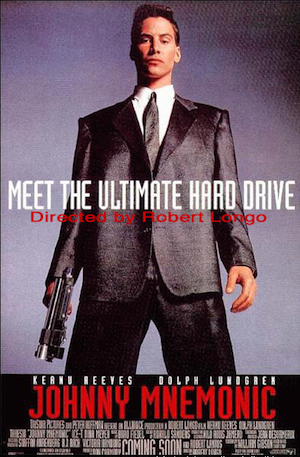 Hello, Ultimate Hard Drive.
"I can carry nearly eighty gigs of data in my head."
Advertisement:

Johnny Mnemonic is a 1995 cyberpunk film, loosely based on the short story of the same name by William Gibson, in which Keanu Reeves plays the title character, a man with a cybernetic implant in his brain designed to store and transport digital data. The film was directed by the famous painter Robert Longo, with a script written by Gibson himself.

Set against the backdrop of the futuristic year of 2021 in a dystopian world ravaged by a fatal plague, Johnny (Reeves) is a "mnemonic courier" (data trafficker) who has an implant that allows him to securely store data too sensitive for regular computer networks. Johnny uses this implant to deliver such data between contracting parties. On one delivery run, he accepts a package that not only exceeds the implant's storage capacity (and will kill him if the data isn't removed in 24 hours), but also proves to contain information far more important and valuable than he had ever imagined. Johnny must deliver the data before it kills him, but a Mega-Corp sends assassins out after him to suppress said data.

The film is also notable for the presence of Takeshi Kitano, making a very rare appearance in an American-made movie, and whose role in the Japanese version of the film was slightly expanded.

Also adapted for a little-known Full Motion Video game for Windows 3 with different actors, as well as a pinball adaptation that is much better received than the movie itself.

The same basic narrative, minus the cyberpunk aesthetic, would later be recycled for the 2003 direct-to-video "mockbuster" Absolon.

What causes NAS? THIS causes it:

The narrative's most central and primary MacGuffin would be the three-image download code, which winds up separated into three parts and needs to be completed in order to retrieve...