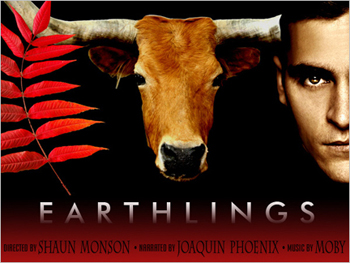 We are all earthlings.
"But for the sake of some little mouthful of flesh, we deprive a soul of the sun and light and of that proportion of life and time it had been born into the world to enjoy."
Advertisement:

Earthlings is a 2005 documentary film about the horrific treatment of animals in the food industry, puppy mills, etc. The film was directed by Shaum Monson, is narrated by Joaquin Phoenix, features music by Moby and was co-produced by Maggie Q.

It is available for free at the filmmaker's website.

Not to be confused with Puny Earthlings.