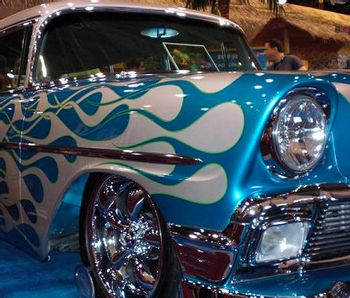 Cubert: Hey, Leela, help me apply these flame decals I got in my cereal. They'll make the ship go faster.
Leela: And what's your scientific basis for thinking that?
Cubert: I'm 12.
— Futurama, "The Route of All Evil"
Advertisement:

The common motif of adding artificial flames to things so they'll seem more badass. This is common in Real Life, especially pertaining to muscle cars (the idea being that the car is so fast, it literally burns as it goes), but there probably isn't a single thing on the planet that hasn't had fire painted on it at some point or another in an attempt to increase its cool factor. In fiction, the possibilities are broader, as detailed below. "Go faster stripes" are a similar phenomenon.

Not to be confused with the Incendiary Exponent, when something is actually on fire. Red Ones Go Faster may be considered a related trope, as red is closely associated with fire, and both tropes are about speed equating to heat.