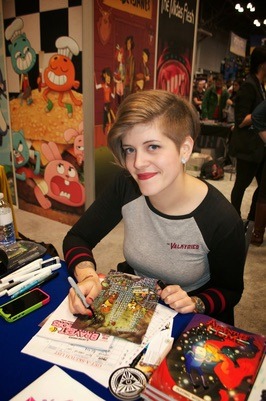 Who is she? She's Kate, that's who!
Advertisement:

Kate Leth (born September 29, 1988) is a Canadian comic writer and artist from Halifax, Nova Scotia (now residing in Burbank, California) who started off as an employee for what has been, in their words, voted the best comic book store in the world, Strange Adventures

She has been self-taught in comics since late 2010 and have already written various stories and even drew some comic covers for KaBOOM! Comics and IDW Publishing. Currently she's writing her own slice of life webcomic Valley Ghouls.

, and she's on Tumblr

(some stuff there is NSFW).

Also, she got some crazy tattoos.

Also also, she has got an army called the Valkyries.