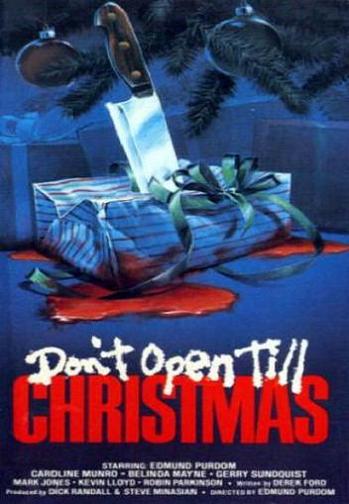 ... It was a puppy, wasn't it?
"... t'was the night before Christmas, and all through the house, not a creature was stirring... THEY WERE ALL DEAD!"
Advertisement:

Dont Open Till Christmas (yes, they spell it like that on the title screen) is a British (yes, really) Slasher Movie released in 1984.

With Christmas only days away, the grand old city of London finds itself terrorized by a sadistic and creative serial killer targeting one specific demographic; men dressed like Santa Claus. Adorned in a translucent mask, the killer prowls the streets, stabbing, burning, impaling and shooting any jolly old Saint Nick he finds. Considering how many of them there are wandering around, it must have been a good year for Santa suits.

After her father becomes another victim, getting speared through the neck while hosting a Christmas party, a woman named Kate Brioski (and her roommate and insensitive boyfriend Cliff Boyd) becomes embroiled in the case, which is headed by New Scotland Yard employees Chief Inspector Ian Harris and Detective Sergeant Powell, who find themselves stumped due to a lack of worthwhile leads or any discernable motive. Additionally, after witnessing one of the murders, a stripper named Sherry Graham finds herself become a target of the killer, who takes her captive for unknown purposes instead of outright killing her. As the bodies pile up, the only person who seems to have any clue as to what is going on is an enigmatic self-proclaimed reporter who refers to himself as Giles Morgan.

While that sounds all well and good, being the creative complete opposite of the usual Bad Santa routine featured in most Christmas horrors, this utter sleazefest of a film is quite a jumbled and confused mess, and for good reason. While production began in 1982, the film remained in Development Hell for two years, due to the title of director continually changing hands; first up was Edmund Purdom (who also portrayed Inspector Harris) who walked off the set, prompting at least three or four others to fill in for him, with one only holding Purdom's former position for a mere two days before being fired. During this time, there was reshoot after reshoot, and rewrite after rewrite, which resulted in more gore, and more continuity and editing problems than you can shake a stick at. When the film finally lurched its way to theatres, it was to little fanfare (presumably due to Silent Night, Deadly Night, released around the same time, and the controversy it caused) before fading into obscurity, nowadays living on through multiple mediocre DVD releases, each one differing in content and length. In summation, it's worth viewing (to some) due to its weirdness, to see What Could Have Been, and if you hate Christmas and want to watch Santas be killed through increasingly bizarre means every six or seven minutes.

And for anyone interested, the film's trainwreck of a production can be seen in the hour-long and less than serious documentary The Making of a Horror Film.

Damn, you opened it! Ugh, might as well see what's inside...