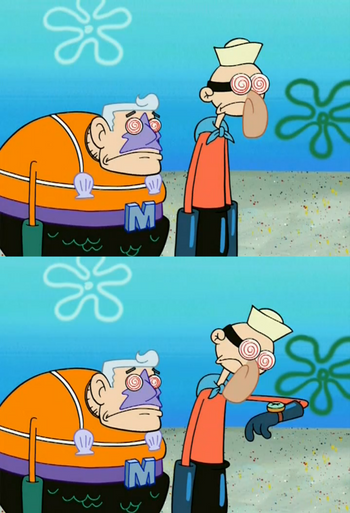 "You know, if I had a watch I'd be looking at my wrist really condescendingly right now."
— Cell, Dragon Ball Z Abridged
Advertisement:

A character glances at their watch for the time, usually during tense situations where a deadline is looming or to show the character's growing impatience.

Then the Fridge Logic hits you: Since when has this character ever worn a watch? In this trope, a character will suddenly have a wristwatch or some other accessory worn merely for a single use, after which the article will be immediately forgotten. In extreme cases, the watch in question is obviously seen not on the character's person before and after its use. Although it can be justified by cleverly hiding such with long sleeves and other concealing clothing.

Sometimes sarcastically defied with a character who isn't wearing a watch looking anyway and commenting, "wrist-o-clock" or something to that effect.