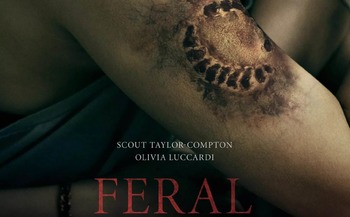 Feral is a Horror Movie by Mark Young.

Six teenagers have gone to spend a weekend on a camping trip out in the woods. They expect it to be a fun time of bonding, seeing the beauty of nature, and fun. Unfortunately, fate has different plans in mind.

One night, one of the students is attacked by some kind of creature, and got a nasty wound from it. The kids decide to pack up and seek help for her, and soon come across a house out in the forest that's inhabited by a man known as Talbot. He lets them stay, and reveals he knows about the creature. It apparently carries some kind of "feral disease" that lays dormant in its host until nightfall, whereupon it turns whoever is infected into a bloodthirsty savage creature.

So now, they all must spend the night trying to defend the homestead from this creature, and each other.