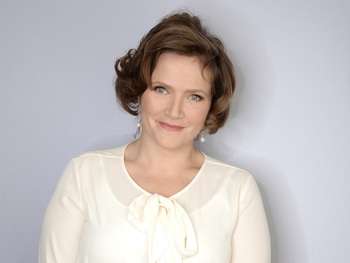 Tallulah Jessica Elina Hynes (née Stevenson, born 30 October 1972 in Lewisham, London) is a BAFTA-winning English actress, writer, and comedian. She was one of the major forces behind the Sitcom Spaced alongside Simon Pegg and Edgar Wright, not only helping create it, but also writing for it and starring on it. The trio met many years before, when they were stage actors.

Jessica Stevenson then followed the example of many other British actors, moving from stage to TV and film. She appeared in the first episode of Midsomer Murders, and played Cheryl on The Royle Family before creating Spaced. She reunited with Pegg and Wright in Shaun of the Dead as Yvonne, and played Bridget's friend Magda in Bridget Jones: The Edge of Reason. Jessica also appeared in Confetti (with Jimmy Carr and Martin Freeman), Magicians (with David Mitchell and Robert Webb), Son of Rambow, Never Mind the Buzzcocks, and Learners, which she wrote.

In 2002, Jessica Stevenson married Robert Hynes, and they now have three children. Jessica changed her stage name to Jessica Hynes, and also began branching out beyond comedy. She voiced Mafalda Hopkirk in Harry Potter and the Order of the Phoenix, played Lucky in Burke and Hare, and played Nurse Joan Redfern and her great-granddaughter Verity Newman in Doctor Who. In 2019, she played Edith Lyons in a new Russell T. Davies miniseries, Years and Years.