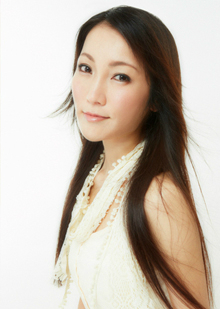 Hyo-sei is a Japanese voice actor and singer who was born April 21, 1973. Throughout her career, she has been known by three names: Kumiko Yokote, her full name which she no longer uses, Hyo-sei, her current stage name, and Erena/Elena Kaibara, her alias for Eroge-related characters. She mostly voices Genki Girls and Tsunderes, though on occasion she'll voice a seemingly Emotionless Girl as well, like Tei Iku from Koihime†Musou.
Advertisement:

She also has a pretty good singing voice, being able to sing both in a cutesy manner (mostly for Eroge songs) and in a more normal register. She released her first single, Fuyu Hanabi, on her birthday (April 21) in 2010.