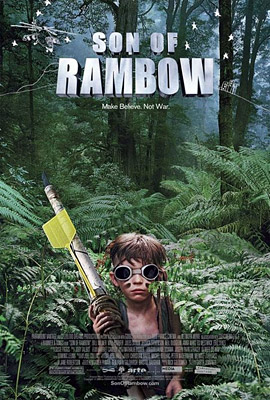 Meet schoolboy Will Proudfoot (Bill Milner), the eccentric but kindhearted son of the beautiful widow Mary Proudfoot (Jessica Hynes), who has a vibrant imagination that could conquer the world. A pity it's suppressed by the fundamentalist sect the Plymouth Brethren

, which has entrapped his family for generations. The only outlet for his creativity is an old bible, which he uses to collect a series of elaborate drawings.

Meet delinquent Lee "devil-child" Carter (Will Poulter), a broken and cynical boy of Will's age who is looked after by his apathetic brother while his mother treks through Spain with her new boyfriend. His routine includes vandalism, shoplifting, smoking, making bootleg videos and generally being a menace to show the world how strong he is. He's a miniature Alex DeLarge in the making, but somewhere inside he still wants to be loved.

In spite of their differences, Will and Lee are brought together by a mutual interest in creative expression, and they end up remaking First Blood with nothing more than a cheap camera and a makeshift movie set. By the end of the summer, they become the best of friends.