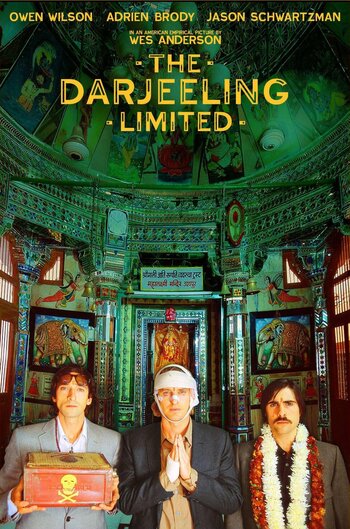 The journey of three brothers across India.note Left to right: Peter, Francis, Jack.
Jack: Wouldn't it be great if we heard a train go by in the distance?
Peter: Not really.
Francis: It'd probably be annoying.
Advertisement:

The Darjeeling Limited is a 2007 American comedy-drama film directed by Wes Anderson and distributed by Fox Searchlight Pictures.

During its theatrical run, the movie was preceded by a Short Film titled Hotel Chevalier, also directed by Anderson. It functions as a prologue to the main film, and introduces Jack (Jason Schwartzman) just before he went on the trip in India, and also features Natalie Portman as his on-and-off girlfriend.

Are those Dad's tropes?