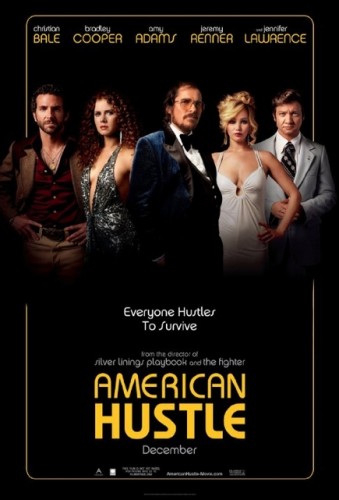 "Did you ever have to find a way to survive and you knew your choices were bad, but you had to survive?"
—Irving Rosenfeld
Advertisement:

American Hustle is a 2013 feature film directed by David O. Russell and starring Christian Bale, Amy Adams, Bradley Cooper, Jeremy Renner and Jennifer Lawrence. It's loosely based on the real life "ABSCAM" operation run by the FBI in the late 1970s and early 1980s, although the film openly acknowledges that it's heavily fictionalized.

The plot revolves around Irving Rosenfeld (Bale), a brilliant small-time con-artist who, with his lover Sydney Prosser (Adams) posing as a well-connected British aristocrat, runs a successful fraudulent loans operation out of a chain of dry-cleaners. The good times are brought to a rapid halt, however, when they're busted by ambitious FBI agent Richie DiMaso (Cooper), who uses the threat of jail time to force them into working for him as part of a sting operation to expose local corruption in New Jersey, beginning with Carmine Polito (Renner), the idealistic mayor of Camden. DiMaso soon sets his sights on higher targets, however, and there's also Rosenfeld's highly unstable wife Rosalyn (Lawrence), whose suspicions about her husband's extra-marital activities put everyone at risk.

The film earned 10 Oscar nominations but went home empty-handed, becoming the third film with that amount of nominations to earn no wins and tied with Gangs of New York and True Grit for second place among the biggest losers in Academy history. It is also the third Oscar-nominated film where all of four acting categories didn't win any since My Man Godfrey in 1936 and Sunset Boulevard in 1950. (It did score big at the box office, however, taking in just over $150 million domestically and a further $101 million elsewhere.)

Not to be confused with a 2007 R-rated comedy film starring Kat Williams.