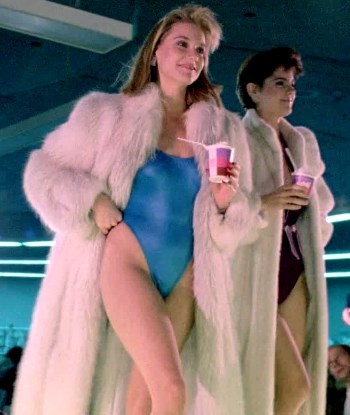 Perfect for both a Fashion Show runway and lounging by your mansion pool.
Mary: Too warm? I like wearing my furs in summer. Especially over a swimsuit!
Bill: Hey, Dear, that was supposed to be private!
— Knights of Buena Vista
Advertisement:

This is wearing a fur coat or wrap with a swimsuit (either one piece or two piece). It also doesn't matter if the fur is real.

Used for many purposes (aside from actually swimming of course). An obvious one is for Sex Sells in advertising, regardless of whether the product is the fur, the swimsuit or something else entirely (often a car).

Older Beauty Contests would crown the winner with an ermine-lined cape, while she wore her swimsuit (along with high heels, which are also not useful for swimming).

Some publicity photos for movie starlets in The Golden Age of Hollywood had the actress wear this kind of outfit.

This can also count if the lady is wearing Fluffy Fashion Feathers (if those are worn in ways that fur is worn).

A Sub-Trope of Pretty in Mink, Impractically Fancy Outfit, and Fanservice.

Compare Fur Bikini, Sexy Coat Flashing, Naked in Mink (the saucier form of this trope), Walking Swimsuit Scene. Not to Be Confused with Selkies and Wereseals putting their sealskins back on in order to swim.