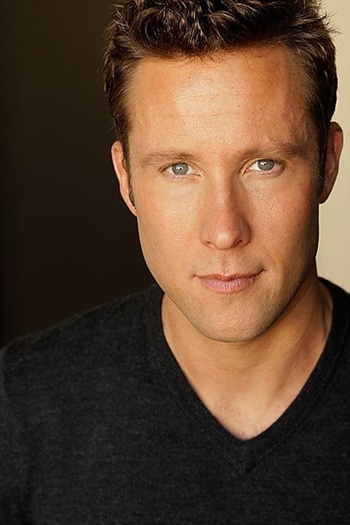 I am the villain of the story.
Advertisement:

Michael Owen Rosenbaum (born July 11, 1972 in Oceanside, New York) is an American actor and voice actor. As an on-screen actor, he's best known for playing Lex Luthor on Smallville, Adam/Adina in Sorority Boys, Kip in Kickin' It Old School, and Dutch Nilbog in the short-lived Breaking In. As a voice actor, he's best known as the voice of the Wally West incarnation of The Flash in Justice League (replacing Charlie Schlatter, who voiced him on Superman: The Animated Series), Agent West in The Zeta Project, and Nick Carlyle in Lollipop Chainsaw.

He returned to voice the Flash in Justice League: Doom, this time playing Wally West's uncle and predecessor, Barry Allen—mirroring his predecessor as DCAU!Wally, Charlie Schlatter, who voiced Barry on The Batmannote It should be noted that Word Of God stated that the Flash on The Batman was Barry and he was never named on-screen; it's explicitly shown in Justice League: Doom that the Flash is Barry, though Schlatter would voice a Flash who it's clear is Barry in Scooby-Doo and Guess Who?. He'd later voice Barry in Infinite Crisis and LEGO DC Super-Villains.

These days, he hosts a podcast called Inside of You

, wherein he interviews various celebrities across the entertainment industry about themselves and their careers, mostly actors.