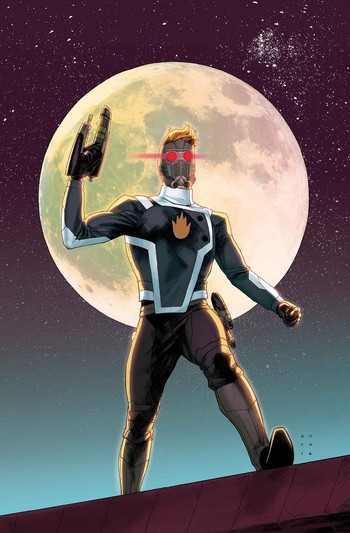 Described by co-creator Englehart as "an unpleasant, introverted jerk" who becomes "the most cosmic being in the universe," Star-Lord was a product of Englehart's newfound interest in astronomy at the time. Fans of the character's current iteration reading this might laugh at how much he's changed since, but as they say on TV Tropes, characterization marches on. In any event, Peter was originally presented as an arrogant, anti-social astronaut who accidentally became an outer space badass, and only some of those qualities have been retained through the years.

One of the character's early adopters was none other than infamous X-Men scribe Chris Claremont, who more or less took over the reins from Englehart in The '80s in titles, writing Peter in titles like Marvel Super Special, Marvel Spotlight, and Marvel Premiere.

Star-Lord then proceeded to languish in relative obscurity for years until the early early Naughts, playing a key part of Marvel's reinvigorated cosmic line. Following notable appearances in Thanos and Annihilation, Star-Lord joined the new Guardians of the Galaxy, where he's been best known since.

With the Marvel NOW! initiative in 2013, Star-Lord (and his fellow Guardians) were further implemented into the greater Marvel Universe, showing up in the pages of Avengers Assemble, as well as starring in a new volume of Guardians that initially teamed them up with Iron Man. In 2014, Star-Lord headlined his first ongoing title, Legendary Star-Lord.

During this time, Peter met Kitty Pryde in "The Trial of Jean Grey" —a crossover with the X-Men— and their relationship soon developed into a romantic one. "The Black Vortex", another X-Men Crossover, ended with Star-Lord asking for Kitty's hand in marriage, which she readily accepted.

Shortly after his engagement to Kitty, Peter ascended to the throne of Spartax, succeeding his archnemesis dad J'Son — oh yeah, did we mention he was the prince and heir apparent to an alien empire all this time?

Just as quickly as Peter became the ruler of Spartax, Secret Wars destroyed the Marvel Universe; luckily, Peter was brought on an interdimensional life raft conceived by Reed Richards —a rare aversion to the trope claiming he's useless— which brought him to Battleworld, making him one of the few people in the entire Marvel Universe who remembered the world that existed before God Doom came into power. In spite of himself, Peter played a role in the taking of Doomstadt, which ultimately led to the restoration of the previous Marvel Universe. During this time, he also co-headlined the Star-Lord & Kitty Pryde limited series, which paired him up with the Age of Apocalypse version of his new fiancee —- and she wasn't exactly enamored with him.

After that, Peter's duties as emperor of Spartax put him out of commission with the Guardians, with Kitty ultimately taking up his mantle as Star-Lord in the interim of the new Guardians volume. In the meantime, a second ongoing title — Star-Lord — launched, retelling Peter's origin as a wayward astronaut.

Star-Lord appears in the Marvel Cinematic Universe, played there by Chris Pratt. It's widely believed that the Guardians' new emphasis in the comics was intended to serve as a primer for their first movie; an effort that clearly paid off, since Guardians of the Galaxy grossed a total of $773.3 million worldwide! Many attribute the success of Guardians to Star-Lord.

Star-Lord and Pratt alike have since become iconic action heroes in the vein of Harrison Ford and his roster of swashbuckling rogues (see: Han Solo, Indiana Jones), while the unlikely success of Guardians spawned a planned trilogy of films; a sequel titled Guardians of the Galaxy Vol. 2 was released in 2017, with a third installment to follow. He also shows up in 2018's Avengers: Infinity War.