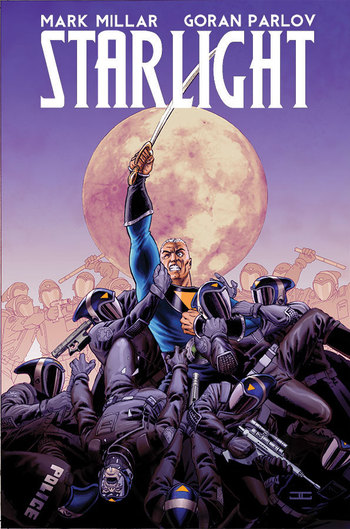 It's been forty years since Captain McQueen was whisked away to another galaxy via wormhole, and he's living a pretty crestfallen life afterwards, especially after the death of his wife thanks to breast cancer. Nobody believed Duke when he claimed he visited an alien world and was hailed its hero, but he didn't mind the scrutiny when he had a pretty decent life to live. With the death of his wife, McQueen's nostalgia for the glory days have caught up to him. Fortunately, destiny came to him one rainy night.

A twelve-year-old (in Earth time) Tantalus resident named Krish Moor has literally come to his doorstep, seeking his help in dealing with a new threat to Tantalus's freedom named the Kingfisher. Despite his plea that he is an old man, McQueen nonetheless suits up in his iconic spacesuit and travels to Tantalus, aiming to help the Resistance take down the telekinetic tyrant.

Written by Mark Millar and drawn by Goran Parlov, the miniseries is not only Flash Gordon mashed up with The Incredibles but yet another story from Millar where he defies the Darker and Edgier tone he had become associated with.

A film adaptation is in the works at 20th Century Studios, with Joe Cornish (Attack the Block, The Kid Who Would Be King) set to direct.