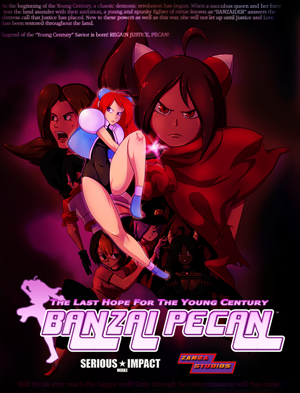 BANZAI PECAN: The Last Hope for the Young Century is a fanservice-laden indie beat 'em up by SERIOUS☆IMPACT WORKS.

Set in the year 20XX, Pecan Apple and her new boyfriend Cinnamon Basil were out a date one day until a leader for a group of succubi calling themselves the Sexilicous Seven appears out of nowhere and kidnaps Pecan's boyfriend, with something about him being the key to an even bigger plan. Not one to sit idly by and let these demonic harlots steal her boyfriend while releasing chaos unto the world, Pecan invokes the powers of the Banzaider, the "super-soldiers of justice", and transforms into the buxom, badass super-heroine of justice, Banzai Pecan.

The gameplay is akin to beat 'em ups such as Kung Fu Master and Splatterhouse as Pecan traverse through a single 2D plane as she fights enemies while avoiding the various hazards and occasionally bottomless pits. Our heroine has a repertoire of moves she can pull off against her enemies, such as lightning-fast kicks, flare kicks, kicking ass with her own ass, air combos, and various special moves she can learn along the way. If Pecan find herself overwhelmed by her enemies, she can side-step out of the way of an attack, roll out of a tight situation, or quickly summon a barrier to provide breathing room.

Development for the game started roughly in 2008 with a release window originally intended for a late summer 2008 release, with a rather minimalistic presentation with small and simple sprites. In 2009, the developers used a new engine for the game with revisions made to the sprite-work and the game itself. On August 6th, 2012, the game was finally released for Windows PC and was available for a time on DESURA and Indievania up until the dissolution of those platforms. It was also up on Steam Greenlight during its release for a time until the game received harsh backlash, but it returned

years later by popular demand from the fans and was eventually release through Steam. The game's original

can be streamed or purchased from Luminous Riot's Bandcamp profile at any price, including free.