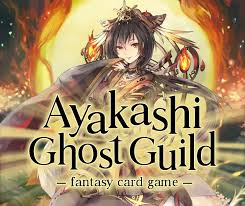 Ayakashi: Ghost Guild (あやかし陰陽録, Ayakashi Onmyouroku) was a Zynga game for mobile platforms. A Card Battle Game originating from Japan (specifically, Zynga's Japanese branch before it closed at the end of 2012, and the development then shifted to Zynga's Chinese branch before it closed in February 2015), it has been translated into Chinese, English, Korean, and major European languages. The key mechanism in Ayakashi: Ghost Guild is cards, or daemons which are collected, enhanced and used for battle. There was also a central story running throughout the game. Various statistics govern the ability of players to explore the story line and use their cards for battle, while events provide additional opportunities for card collection.
Advertisement:

You step into the shoes of a ghost agent, or onmyouji, and are tasked to solve supernatural anomalies that happen in modern-day Japan with the help of your spiritual companion, Mira.

Due to Zynga's Chinese branch being shut down in February 2015, the company decided to pull the plug on the whole thing and ended the game's operation on April 30, 2015. However, there are efforts being made to revive the game. For instance, the original dev team behind Ayakashi: Ghost Guild reformed themselves as a brand-new independent company named Mira Miracle and plans to develop a sequel on top of developing a brand-new Card Battle Game: Otogi: Spirit Agents.

Has a regularly-maintained wiki here.

This game provides the following tropes.