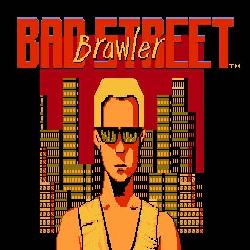 Are you a bad enough dude to fight off circus midgets?
"Bad Street Brawler was designed to be used with the Nintendo Power Glove, and they go well together since neither of them work."
Seanbaby, EGM'S CRAPSTRAVAGANZA: TOP 20 WORST GAMES OF ALL TIME

Bad Street Brawler is a Beat 'em Up released in 1987. While it's been on other systems like Commodore 64 and DOS (under the names Bop'N Rumble and Street Hassle, depending on where you live), the game is best known for its infamous Nintendo Entertainment System version, released in 1989.

In the NES version, you play as Duke Davis, "A former punk rocker and the world's coolest martial arts vigilante." In each level, you'll face off against circus midgets, gorillas, skateboarders, and other odd foes to save the city with a variety of moves, ranging from basic punches and kicks to strange ones like a trip where he uses his bare hands or twisting someone's ear. Before each level, you can practice your moves on a punching bag, along with some odd attempts at philosophical quotes. The original home computer versions of the game aren't much different, and have you control the mustachioed speedo-wearing wrestler Gorgeous Greg, who is out to clear the streets of scum and villainy so the defenseless grannies can walk peacefully. It plays similarly to its later NES port, though it lacks the before-level training segments and cutscenes, and is an endless game.

The game itself flopped hard due to its clunky controls and uninspired — often frustrating — gameplay, and it's a frequent sight on various "worst games of all time" lists. It was also one of two games to utilize the failed Power Glove accessory, the other being Super Glove Ball. The Power Glove had some special attacks that could only be used with its motion controls.

This game contains the following examples: