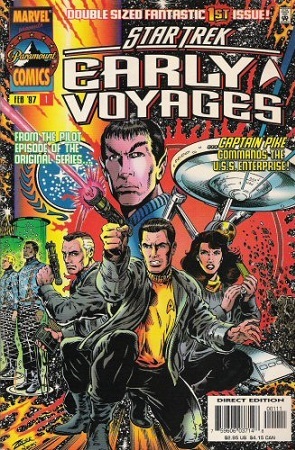 Star Trek: Early Voyages was a comic book series published by Marvel Comics from 1997 to 1998. All seventeen issues were written by Dan Abnett and Ian Edington.
Advertisement:

A Prequel to Star Trek: The Original Series, the series was based on its first pilot "The Cage" and depicted the five-year mission of the U.S.S. Enterprise (NCC-1701) under the command of Captain Christopher Pike. Like "The Cage", it took place in 2254, 12-13 years before the events of the first season of The Original Series.

Early Voyages was unceremoniously cancelled in the middle of a story arc, ending with an unresolved Cliffhanger. Marvel lost the Star Trek license shortly afterwards.

Much like its fellow Marvel series Star Trek: Starfleet Academy, the series was retroactively incorporated into the Star Trek Novel Verse as three of its original characters (Moves-With-Burning-Grace, Nano and Sita Mohindas) were later featured or mentioned in Star Trek novels.