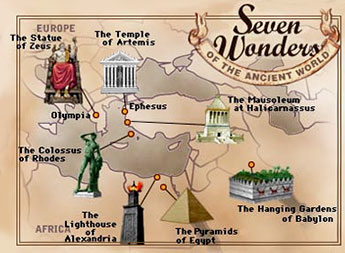 Apparently "the World" was a lot smaller back then.

The Seven Wonders of the World are lists of the seven most amazing things on Earth — as in, things mankind has created that are considered examples of our greatest feats. Can be considered as Real Life listings of humanity’s Moments of Awesome. Many of the Wonders have become iconic images across the World today and so show up often in fiction as well; they are often destroyed, animated or stolen. Some can even be considered to be Trope Makers on their own.

Why seven things? It's just tradition; the first list, made thousands of years ago, had seven items. Some lists have "honorary mentions" making them actually longer.

The first lists are now referred to as the Seven Wonders Of The Ancient World, compiled by Herodotus (484 – ca. 425 BC), and the scholar Callimachus of Cyrene (ca. 305 – 240 BC) at the Museum of Alexandria. The original term was actually Seven Sights of the World. No copy of either of their writings on these lists have survived, but they were referenced by many other figures in the Middle Ages, allowing us to know to this day the monuments that figured on the lists. They listed the following:

Of these, only The Great Pyramid still stands today. The Ishtar Gate was excavated in 1902 and it has been partially rebuilt at the Pergamon Museum in Berlin.

It's not rare in fiction (or Real Life) for something to be declared great by being given the title of "Eighth Wonder of the World". Though, if one were to get technical, the eighth spot is already taken by the Lighthouse of Alexandria. Also note that the lists are not in order of importance.