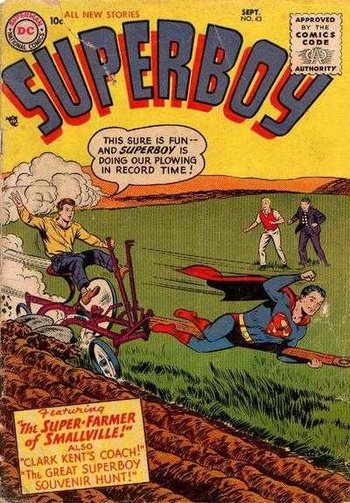 Detective Kevin Ryan: Your alibi checked out.
Detective Tom Demming: Thank you.
Ryan: [to Castle et al.] He really was coaching an underprivileged youth basketball league.
Demming: Well, for what it's worth, my kids won that night.
— Castle, "Den of Thieves"
Advertisement:

You know them well. They're people with public service at heart. When they aren't saving the world from evil aliens trying to tear a hole in the space-time continuum, they're helping old Mrs. Reed weed her garden. Their humility is admirable, and they are a lesson for us all.

This can apply to mundane heroes such as police officers just as easily as it can to superheroes. Coaching kids' sports leagues is a very common choice for the extracurricular activity, since it lets them show off their athleticism while at the same time doing good in the community.

This activity often serves as a plot hook if whomever they're helping by this activity then becomes involved in something pertaining to the hero's day job. For example, cop shows often have the protagonist helping community centers and so forth in poor neighborhoods, and the kids they help often end up entangled with gangs from which the hero must extricate them.

Because good feels good, heroes usually find these activities relaxing and fun and a good vacation from their normally stressful lives.

Expect a Small Steps Hero to do this often, as well as The Paragon and anyone seeking to be A True Hero. Beware of Holding Out for a Hero, though, when the citizens become complacent.