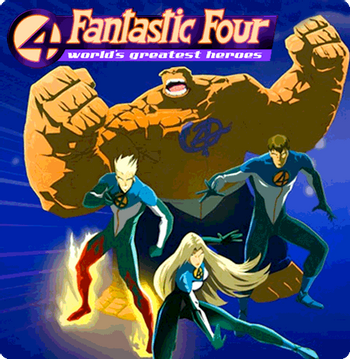 The Fantastic Four won't rest until they find whoever tagged The Thing (Pssst: It was Johnny!)
Advertisement:

A 2006 animated adaptation of Marvel's First Family: The Fantastic Four, meant to market the team to a new audience who were coming off the 2005 movie and heading into its 2007 sequel (which probably ended up working against the show during its initial broadcast). Produced by French animation firm Moonscoop. The name "World's Greatest Heroes" refers to the comics' original tagline, "World's Greatest Comic Magazine".

The series as a whole was Lighter and Softer, focusing much more on the Fantastic Four as a sitcom family who happened to go on adventures rather than a team of superheroes who were also a family.

It was story edited by Christopher Yost.