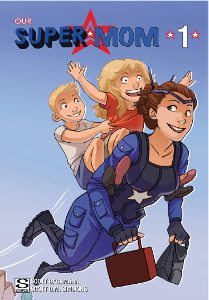 is a webcomic written by Scott Bachmann and currently illustrated by Scott D.M. Simmons. It follows Elisabeth "Liza" Lang-Ramiro, once known as the hero Paragon as she tries to go from a life as a world-saving superhero to a life as a stay-at-home mother who means the world to her children and husband. This is not made any easier when her children develop their own powers, and she finds that the world needs her powers as much as ever.

This webcomic exhibits the following tropes: