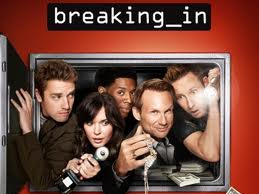 Not your normal day at the office.
Advertisement:

Breaking In is a show similar to Leverage or The A-Team, albeit with a more overtly comedic tone. It is about a college student who is employed by a firm that breaks into companies to test their security. FOX swiftly canceled it

due to weak performance for a show airing after American Idol. It was Uncancelled when FOX renewed it for a second season