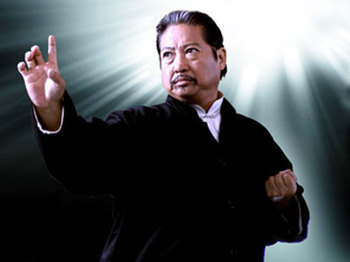 The Great Dragon
"Whether playing a good guy or a bad guy, I want to see that the script has the full character development for me to be a good actor, so that I could use my acting methods to express the character, which will eventually enhance the story telling."
Advertisement:

Hong-Kong-based martial artist, actor, producer, director, and fight choreographer and real name Hung Kam-bo/Hong Jinbao (洪金寶). Hung (born January 7, 1952) is known throughout Asia as "The Great Dragon", and is, along with the other two "Dragons", Jackie Chan and Yuen Biao, credited with creating the modern Martial Arts Movie.

Sammo grew up along with Jackie Chan and Yuen Biao, and the three were raised to become performers of Peking Opera, alongside other kungfu legends like Yuen Wah, Yuan Qiu, and Cory Yuen (Contrary to popular belief, Yuen Wo Ping was not part of the Seven Little Fortunes. Wo Ping's surname is really Yuen; the Seven Little Fortunes just adopted the surname Yuen in honor of their teacher Yu Jim-yuen. Sammo's "Yuen" name is Yuen Long). The Peking Opera tradition is famed for its highly acrobatic fighting scenes, which the three carried with them to their film productions. Sammo's trademark over-weightedness comes from a period in his youth, when he was bedridden with disease for three months and was unable to train.

Hung is not particularly well-known in the West as an actor, but has done a lot of stunt work (he worked as the stunt coordinator on Enter the Dragon, and played Bruce Lee's opponent in the opening scene). He claims to have convinced Lee to have a real fight with him, but won't say who won. In Asia, he is considered one of the superstars of action films, starting with his breakout role in the Affectionate Parody Enter the Fat Dragon. Westerners are most likely to remember him for starring in the TV series Martial Law.

He is trained in Karate, Kung Fu, Hapkido, Taekwondo, Aikido, Wushu and Sanda.

He could have been the swords-master for the Star Wars prequel-trilogy. Unfortunately, the financers of Fox Studios vetoed the idea.