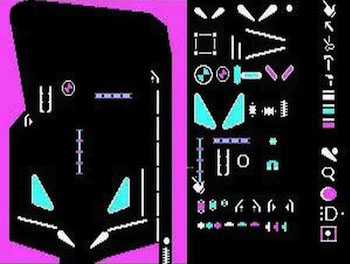 Pinball Construction Set is a 1983 Video Game by Bill Budge for building Digital Pinball Tables. It is best known for being the Trope Maker and Ur-Example of the Game Maker genre, and was one of the launch titles for a company called Electronic Arts.
Advertisement:

With the success of Budge's Raster Blaster pinball game, he decided to expand the tools he had created for that title and make a game about making games. After writing a mini-paint program, sound editor, a save/load system, and several other tools, he dubbed the title Pinball Construction Set, then started BudgeCo with his sister and distributed it to software stores in plastic bags. But Budge soon became burdened by the marketing work needed by a software publisher, and he struck a deal with Trip Hawkins, who was looking for titles to fill Electronic Arts' launch roster.

PCS came with five sample pinball tables; Budge claimed he made "Astro Blast" in a half-hour. The title's main draw, however, was the construction tools, which were controlled with an icon-based drag-and-drop interface. As one would expect, players could adjust the board's boundaries, place components, wire items and establish scoring rules, paint the playfield and title, and even adjust the physics engine. Players could then save the game for later replay, either inside PCS or as stand-alone binaries to share with others.

Pinball Construction Set was ported to the Sega Genesis in 1993 with the title Virtual Pinball.

Computer Gaming World named PCS "Most Innovative Computer Game" in their 15th-anniversary issue. In 2008, it was honored at the 59th Annual Technology & Engineering Emmy Awards for "User Generated Content/Game Modification", and was an inductee in GameSpy's Hall of Fame.