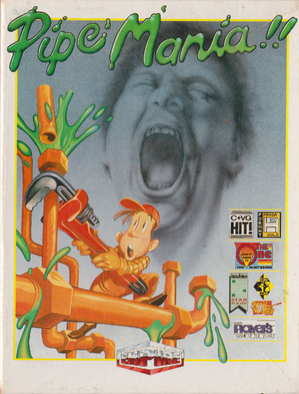 Pipe Mania!!/Pipe Dream (depending on the version you're playing) is a series of computer games, the first of which was released in 1989 for the Amiga, and then later ported to Windows, Macs, and other computers.
Advertisement:

The exact rules of the game vary depending on versions, but a general summation of the game is as follows. The is being presented with a grid, somewhere on which is the opening of a pipe. Liquid will flow from this opening and the player must place pipes on the grid to guide the liquid along them. Depending on the game version, the liquid may begin flowing after a certain amount of time has passed and you're still allowed to lay down pipe while it comes, other times the game gives you a time limit with which to lay down pipe, then sends the liquid down the path you made. You may also be required to guide the liquid along a certain minimum number of pipe segments, to guide it into a drainage tile, or both. Levels may also be pre-designed or randomly generated.

Aside from home computers, the game has also been released in some format or another on the Game Boy, PlayStation, PlayStation 2, PlayStation Portable, and Nintendo DS.