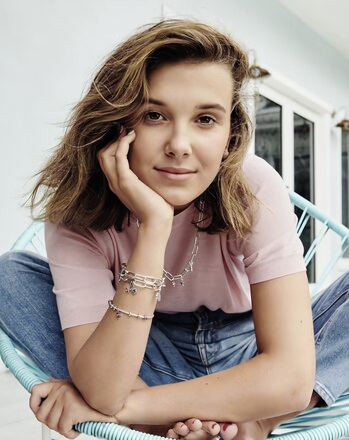 "The thing is, I get asked when I first knew I wanted to act so often, and I genuinely can't answer it. It's just... I got the bug, and that's it."
Advertisement:

Millie Bobby Brown (born February 19, 2004 in Marbella, Spain) is a British actress and model who resides in the United States. She was born with partial hearing loss in one ear, before gradually losing the rest there.

At a very young age, she met a well-respected Hollywood talent scout who informed her parents that she had instincts that couldn't be taught. After a series of small parts, she has gained worldwide fame for her role as Eleven in the Netflix superhit series Stranger Things. She made her big screen debut in Godzilla: King of the Monsters in 2019 and landed the role of Enola Holmes.

This actress' roles include the following tropes: