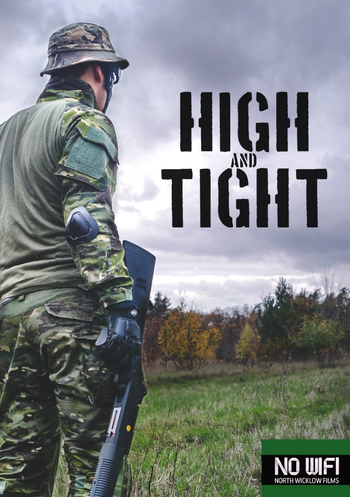 "This is my life! Let me do something good with it."
"You spend your whole life wondering why am I even here? Then one day you wake up and you know..."
—Scott Olsen
Advertisement:

High & Tight is a 2018 Irish Short Film produced by No WiFi Productions and directed by Bobby Calloway.

Set 20 Minutes into the Future, a war has broken out in Eastern Europe. Ireland has been known for neutrality ever since the 1940s, but guess what happens. Now hundreds of young men and women enlist every year. The film follows four soldiers in their final days before they head off to war.

The film is book ended by Scott's younger brother Seth making a documentary about the whole situation. The trailer can be seen here

, and a Q&A with the cast here

The film was released here