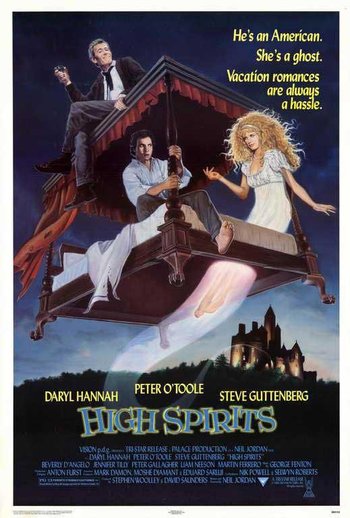 Peter Plunkett (O'Toole) is almost Driven to Suicide when he's unable to pay the bills on his family castle, which he's turned into a hotel/theatre because of said bills. Until his seemingly Cloudcuckoolander mother informs him that she's been having conversations with his father — who's been dead for years.

Plunkett gets the idea to attract American tourists by advertising the hotel as haunted and gets the castle's thespians and employees to pretend to be ghosts. The Special Effect Failure by the actors tips off the Americans that the hauntings are fake, if it wasn't already obvious by the time they were heading towards the castle, and Plunkett plans to return to his suicide attempts until the real ghosts of his ancestors decide if everybody wants a haunted castle, then that's exactly what they're going to get.

A married couple, Jack and Sharon (Guttenberg and D'Angelo), are having problems, and are only there because Sharon's father is trying to get the deed to the castle, and having the castle's hauntings revealed as fake would benefit this greatly. Things don't go as planned, though, because Jack and Sharon begin individual romances with a pair of ghosts, Mary Plunkett and Martin Brogan (Hannah and Neeson), who are stuck in a "Groundhog Day" Loop with Mary repeatedly being murdered by Martin, because he believes her to be unfaithful because she doesn't sleep with him on their wedding night.