Film / Hour of the Wolf 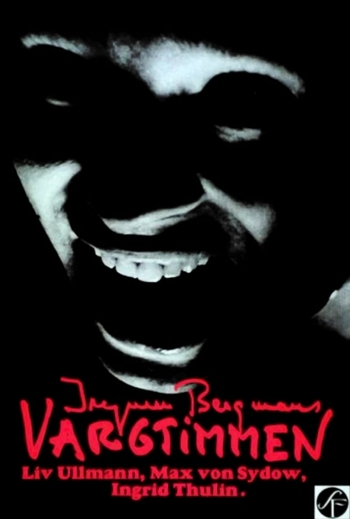 Original theatrical poster
Johan: The old ones called it "the hour of the wolf". It is the hour when most people die, and when most children are born. Now is when nightmares come to us. And if we are awake...
Alma: We're afraid.
Johan: We're afraid.
Advertisement:

A darkly minimalistic, surrealistic ghost story by Swedish director Ingmar Bergman from 1968 (original title Vargtimmen), starring Max von Sydow and Liv Ullmann. The former plays Johan, a painter with a torrid romantic life behind him and Ullmann plays his doting wife, Alma. They live together in solitude on a deserted island when their bleak, windswept domestic bliss is intruded upon by a coterie of very crass, totally realistic looking, upper-middle-class spirits with a taste for fine art.

On the whole, the film relies on subverting common visual storytelling conventions to craft a rather complex Psychological Thriller with little to no special effects. To give some idea what's going on here, take the upper-middle-class spirits: On one level, they could be read as pointing to Johan's contempt for the shallow consumers of his art. They care only for the social currency it imparts. Being in society with these people saps Johan's artistic energy (metaphorically). Or, you might see the beings as supernatural beings that nevertheless are as physical as Johan and Alma. In which case, they are ghosts there to suck his life force. The film leaves both interpretations open for not only the viewer but also the characters. Johan and Alma are as terrified of their inability to fully discern between reality and figments of their imagination as the viewer unsure of what's going on. What's more, at one point, we're also wondering whether Alma, who finally begins to see the characters her husband sees, might even suffer from a shared delusion arising from her being too wrapped up in his strong-willed, charismatic artistic world. That adds a pretty heavy relationship dynamic to the whole thing, which touches somewhat on ideas about women's self-definition (such as in Henrik Ibsen's A Doll's House).