Film / The House That Jack Built 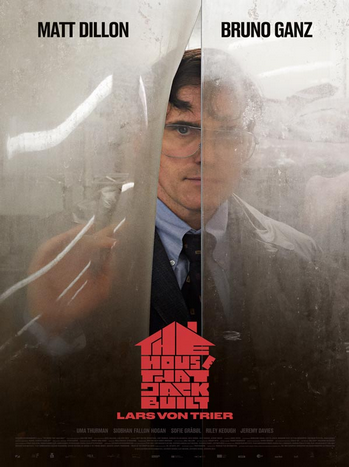 "If you feel like screaming, I definitely think that you should."
Some people claim that the atrocities we commit in our fiction are those inner desires which we cannot commit in our controlled civilization, so they're expressed instead through our art. I don't agree. I believe Heaven and Hell are one and the same. The soul belongs to Heaven and the body to Hell.
— Jack
Advertisement:

The House That Jack Built is a 2018 Psychological Horror film directed and written by Lars von Trier, starring Matt Dillon in the titular role as well as Bruno Ganz as Verge in his final film role. The film debuted at the Cannes Film Festival, and was released theatrically in November 29, 2018 in Denmark, with a simultaneous Video On Demand and theatrical release in America on December 6th, 2018 as a slightly censored cut — a full uncut version was released in June of 2019 and a physical release in February of 2020.

The film follows Jack, who has been a serial killer for most of his life and fancies himself an artist of sorts in his field. The movie centers on him retelling 5 "incidents" over a period of 12 years to the unseen Verge. At several points, Verge interjects to question Jack on his dark view of the world and his delusions of grandeur, leading to lengthy discussions about philosophy and ethics.