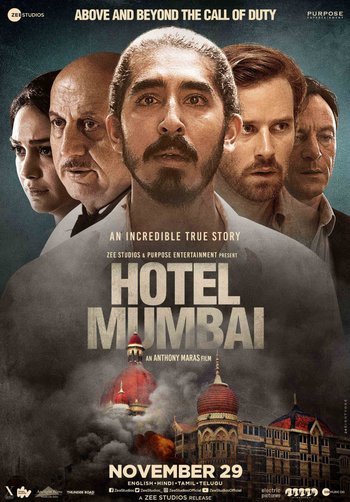 Hotel Mumbai is a 2018 action thriller film directed by Anthony Marras. It is based on the real events of the 2008 when a group of terrorists made the series of attacks across Mumbai (now known as 26/11). The film is hugely inspired by the 2009 documentary Surviving Mumbai that tells about the same events.

The film follows several characters played by the prominent Hollywood actors. Arjun (Dev Patel) is one of the workers of the Taj Hotel who tries his best to keep people in safe, while an American David (Armie Hammer), his British-Muslim wife Zahra (Nazanin Boniadi) and a Russian businessman Vasili (Jason Isaacs) are among the guests that are trapped in the hotel which is occupied by the group of terrorists.

The film got fairly positive reception from the critics and the general audience.