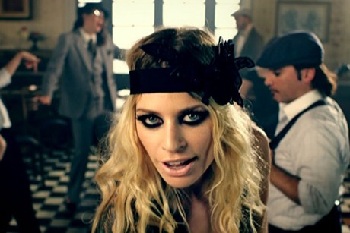 This place ain't nothin' but a gin joint.
"I got lots of jealous lovers that all wish they had me back
Got a pistol for a mouth my old mama gave me that
Building my own road out of gravel and some wine
If I have to fall it won't be in your line"
Gin Wigmore, "Black Sheep"
Advertisement:

New Zealand-born Virginia Claire "Gin" Wigmore (born 6 June 1986) wrote her first song at age 14. Two years later (after her father's death), she put her music career on hold and moved to Argentina to become a teacher. Upon returning home, she honored her dad with the song "Hallelujah," which won the 2004 International Songwriting Competition - the first time an unsigned talent had won. The song would later appear on her 2008 debut EP (coincidentally titled Extended Play). A year later, her debut album Holy Smoke arrived and parked several hits in the New Zealand music charts. For her 2011 release Gravel and Wine, Wigmore beefed up her sound with heavy doses of rock, blues, and even jump swing. (The album got an official US release in April 2013.)

Her third album, Blood to Bone, was released in the US on August 28, 2015, a few months after coming out in her native New Zealand. Fourth album Ivory was released on April 2018, sharing its name with Wigmore's son, born seven months earlier.

You've probably heard Wigmore without even realizing it; her songs have wound up in TV shows (Teen Wolf, Weeds, Grey's Anatomy) and commercials for Lowes

. She's almost as well-known for her unconventional looks (ornate tattoos, heavy eyeliner) as for her growly, Macy Gray-like voice.