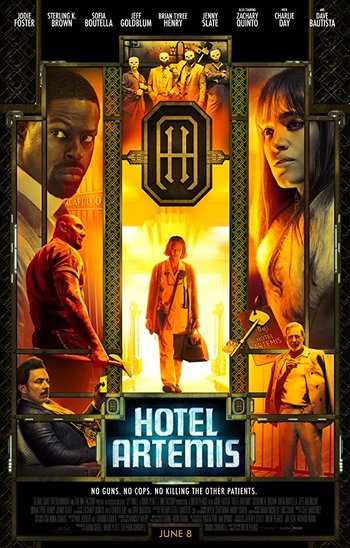 "All the leaves are brown, and the skies are gray..."
1. While on the premises, no fighting with or killing other patients.
2. No disrespectful words or actions allowed against Hotel Artemis staff.
3. No guns or any type of weapon permitted through the gates.
4. Memberships must be paid for in full and in advance.
5. Prior but lapsed members will not be admitted.
6. No photography or video allowed.
7. No outside food or drink.
Advertisement:
8. Absolutely no visitors.
9. If member is found to have compromised or led to compromise of location, membership will be revoked.
10. Hotel Artemis rules are final and non negotiable.
— The Rules of the Hotel Artemis

In a riot-torn near future Los Angeles, tucked away into a graffiti-covered, rat-infested corner of Downtown is a rundown hotel with a secret - it's an emergency room for those in the know, where discretion is a key virtue of the firm. You see, its customers are primarily criminals. Usually, high-end criminals who have the means to pay for surreptitious medical care.

The Nurse (Jodie Foster) runs the whole show mostly by herself, with only the orderly Everest (Dave Bautista) on hand to help fix things and keep the peace - by any means necessary. With an arms dealer (Charlie Day) with a badly cut face and an attitude problem in the Acapulco Room, a sullen assassin (Sofia Boutella) with a gunshot wound in the Nice Room, and a riot in progress down in the city streets, it seems like just another Wednesday - that is, until a set of bank robbers come in for treatment, unaware they're carrying some very hot property belonging to the vicious crime boss The Wolf King of Los Angeles (Jeff Goldblum). Then more complications set in when the Nurse gets advance warning that the Wolf King is on his way in for treatment, about the same time someone shows up at an entrance begging for help: a cop (Jenny Slate) - who seems to have a connection to the Nurse somehow...