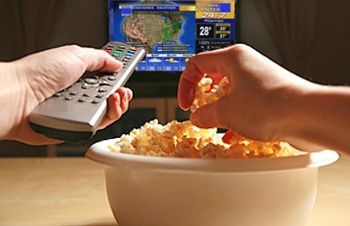 The latest network dramas will never beat watching humdrum thunderstorms moving across the northern Iowa River Valley.
"There is no such thing on earth as an uninteresting subject; the only thing that can exist is an uninterested person."
— G. K. Chesterton
Advertisement:

Periphery Demographic taken to its logical conclusion. For this particular medium, what's surprising is not that it has fans outside its target audience, it's that it has fans at all; it wasn't meant to entertain anyone, just inform them, or fulfill some other strictly functional role. But perhaps there's something hypnotic about watching the weather forecast on a perpetual loop, or maybe that educational short film has aged badly and picked up some Narm along the way. Either way, you can bet most of the people watching aren't doing it out of a first-hand interest in the subject.

Sometimes the makers will discover the extra audience, resulting in an Audience Shift. May overlap with Just Here for Godzilla if the Godzilla part makes all the boring parts worth it. Mundane Made Awesome is this trope when the subject isn't interesting to begin with, but becomes that way with a little imagination. Compare Incredibly Lame Fun, where something that bores other people in-universe has at least one character who thinks it’s interesting or fun. Compare and contrast Only One Finds It Fun.