Film / The House With a Clock in Its Walls 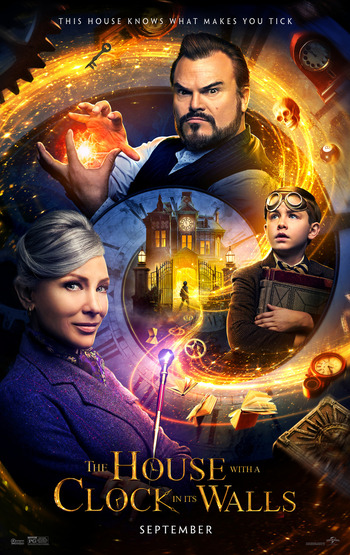 "Three gongs. Last time it was four. What happens when it gets down to one?"
Jonathan Barnavelt: This house used to be owned by another warlock.
Mrs. Zimmerman: He’s very wicked, very powerful.
Jonathan Barnavelt: He left a hidden clock in the walls. We don’t know what it does, except something horrible.
Advertisement:

The House with a Clock in Its Walls is an 2018 American Gothic Horror Fantasy film directed by Eli Roth and written by Eric Kripke, starring Jack Black, Cate Blanchett, Owen Vaccaro and Kyle MacLachlan. It is an adaptation of the book of the same name.

Lewis Barnavelt (Vaccaro), a young orphan, has to help his warlock uncle Jonathan (Black) and their witch neighbor Mrs. Zimmerman (Blanchett) to find a clock that could cause the end of the world.

The House With A Clock In Its Walls contains examples of: