Film / The House on Sorority Row 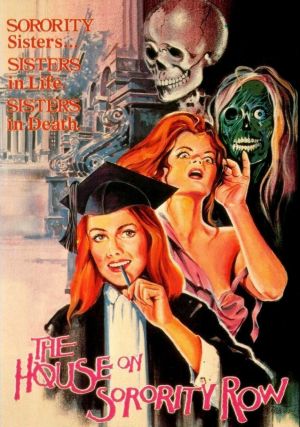 The House on Sorority Row is a 1983 Slasher Movie and one of many released in the wake of other popular Slasher Movies like Halloween, Friday the 13th and A Nightmare on Elm Street. It was moderately successful when it was released and is now a cult classic among fans of the genre. It got remade in 2009 as Sorority Row with Carrie Fisher in a prominent role.

The story revolves around seven college girls staying in a Sorority House. It's the end of the year and all seven girls are graduating, planning to hold a huge party in the house at the end of the week. Unfortunately for them their house mother, the imperious Mrs. Slater, forbids it. For some reason she always closes the house on the same date every year before the other college houses close. The girls plan to get their revenge by pulling a little prank which backfires and ends up getting Mrs. Slater killed. Panicking, the girls hide the body in the pool and continue with their graduation party. Meanwhile someone is stalking the people at the party and murdering them with Mrs. Slater's own walking cane. Perhaps Mrs. Slater is Not Quite Dead after all?